It was a warm Summer night in July. Courtney Novello, a clinical perfusionist (and now clinical area manager with SpecialtyCare), entered the hospital for what she thought was going to be a slow Friday evening. During her 3-11 p.m. shift, she never expected to walk into one of the most intense cases of her career.

Courtney arrived at the ICU to find her new patient, Andrew Taylor, in horrible condition. He was brought in to the hospital earlier that day in cardiac arrest. Andy, a 42-year-old husband, and father of two suffered a massive heart attack due to a blood clot in the left main coronary artery. Doctors call this type of heart attack “the widow maker.” Down in the emergency room, he had continued to go into V-fib arrest. V-fib is considered the most serious cardiac rhythm disturbance, the type of arrhythmia that is extremely life-threatening. He was shocked multiple times in attempts to get his rhythm back on track.

Will This Patient Survive the Night? 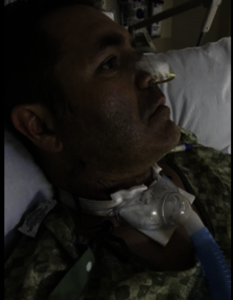 She arrived in the ICU and a found a human being as broken as he could possibly be. Andy Taylor was maxed out on everything, bleeding from everywhere, had burn marks from where he had been repeatedly shocked, had only marginal blood pressure, and was in pulmonary edema (fluid in the lungs) and filled up the ventilator tube. He was drowning literally and metaphorically. Courtney had doubts about him surviving the night, let alone the next few days.

Meeting and Comforting the Family

The next day, Courtney met with Andy’s wife, Heather, and their two kids Madi and Caleb. They told Courtney how Andy was exercising the day before and didn’t feel well. He eventually passed out at home, and Heather called 911 as Madi entered the room and turned her dad over onto his back. During that moment, Heather panicked because she didn’t know CPR, and then Caleb entered the room to save the day. “Mom, I got this.” Caleb started performing CPR on his dad until the EMTs arrived. Courtney reassured Heather that her 14-year-old son saved his father’s life.

Andy still wasn’t doing well, and Heather began to wonder if he was still present under all the sedation. It was then that Courtney and the nurse decided to do a sedation holiday. This is standard procedure to check the neurological status of a patient, but Courtney wanted to do it while Heather was there. They turned off his sedation and patiently waited. After a while, Andy started to respond to Heather. Courtney asked if she would like the kids to see him, and she said yes. Courtney ran to the waiting room and grabbed Caleb. Upon entering the room, the 14-year-old was scared and wasn’t sure what he should be doing. “Hold your dad’s hand,” Courtney told him.

Andy was still responding to Heather, but Courtney noticed Caleb’s eagerness for his dad to respond to his touch. “Talk to him,” she told him. As soon as Caleb started talking, Andy grabbed his hand. Caleb then turned and hugged Courtney, whispering “Thank you.”

“It was in this moment that I knew this man had to survive for his family no matter what and that I had to see him through to that end,” Courtney said.

She had Andy on ECMO for the next six days. During that time, she worked multiple shifts with him and his family, in full awareness that as a medical professional, you’re not just taking care of the patient, you’re taking care of their loved ones as well. During that week, Courtney met every member of Andy’s family and most of his friends.

She would bring them into the room, they would say a few words and then leave in tears. But most importantly, Courtney got to see Andy turn a corner toward improvement. Slowly but surely, he fought his way back to his family. This man who many thought would never hug his wife and kids again finally came off ECMO on August 2, 2018. Courtney was there to remove the machine and was able to tell his family once it was out. 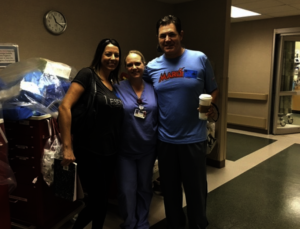 All in all, Andy was in the hospital under the care of Courtney and the rest of the medical staff for a total of 21 days. Courtney continued to check on all of them after he was discharged, as she does for all her ECMO patients. The Taylors still come visit her when Andy has his cardiac rehab appointments. His family and their story is the reason why Courtney does what she does every day. We are SpecialtyCare.