From Soldier to Perfusionist – Erin Friesenborg’s Life in the OR 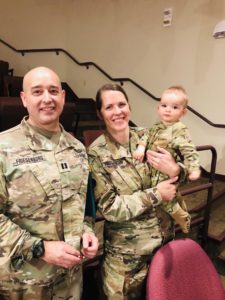 If at first you don’t succeed….

This proverb is one Erin Friesenborg knows all too well. As an Army Combat Medic, her dream was to enroll in the Army Physician Assistant program. For seven consecutive years, she applied with no luck. And on her last attempt, the program director raised the hard-science minimum GPA. She missed it by 0.1 points.

Disappointed and frustrated (and decidedly done with the PA program), Erin confided in her mom, who told her that some of her friends with healthcare careers recommend that she check out perfusion school.

“The rest, as they say, is history! I hadn’t even heard of perfusion,” said Erin.

She did some research, connected with a perfusionist, observed a few cases, and decided to try, try again. She applied to three master’s programs. and was thrilled when she received her acceptance letter to Quinnipiac University in the spring of 2015 – on her first attempt. And just after graduation, she joined SpecialtyCare as a perfusionist in the Twin Cities.

After 15 years of deployments and transfers – not to mention juggling these moves with her husband, Christian, who is active military –  Erin was thrilled to settle down in Minnesota, her home state, and start a family of her own. Their son Siebo turned one in July.

Erin is a Major in the Army Reserve and a Medical Operations Planner in the Surgeon’s Directorate at the 88th Readiness Division out of Fort McCoy, Wisconsin. With 17 years of combined active duty and reserves, Erin loves being a soldier and plans to complete 20 years. 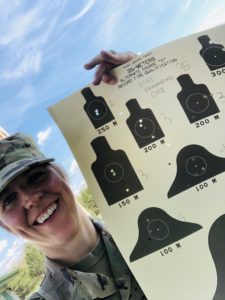 What military training do you feel has helped you transition to the operating room?

Being a soldier really prepared me for the rank structure that exists in the OR. While I was just as nervous as any new perfusionist in the OR, I also was familiar with that nervousness. I’ve briefed 3-star generals as a young captain. I’ve been a company commander briefing 300 troops.  I quickly picked up on how and when to approach the surgeon or the anesthesiologist, really in a way that I would approach my commander or a higher ranking officer. Be informative, be honest, be concise and be confident.  I had to remind myself that I was like an Army private in my new job and that I need to learn but to also be assertive and advocate for my patient.

Tell us about your first case and how you have grown as a perfusionist since.

Wow was I nervous, but it was a good nervous. I had so many things buzzing through my mind. I reminded myself that I was well-trained, I had knowledgeable peers I could reach out to, everyone in the room was a team and everyone had the same goal in mind. That calmed me. I went through troubleshooting the worst-case scenario, contingency plans, and the what-ifs. When the case was over, I was a better perfusionist than I was when it started. Ya know, I’m always a tiny bit nervous before every case. I’m ok with that.

What do you love most about your job?

I love the intensity and technical aspect of perfusion. I love the team aspect (whether it’s in the OR, ICU for ECMO, Cath Lab and eCPR). Just because I’m the only perfusionist in the hospital sometimes, I never feel like I’m on my own. Some cases are straightforward and some are incredibly challenging. I learn something new every case. I ask questions from the different staff in the room. I try to teach others about perfusion. There is also a lot of diversity. When I was in training, I felt that I would be limited and that perfusion would become something repetitive, but it is the opposite. With ECMO, flight training, TransMedics organ transplant studies, and even day-to-day device management, there is no limit to learning new things.

Is there a particular case you’ve worked that has had a significant impact on you?

Each challenging case that ended in a loss of life has had a significant impact on me. We enjoy so many successes that it is easy to not be affected, so the patients we lose are especially hard. Yet it is these cases I learn the most and it is when the OR team really relies on each other. We feel the collective loss and although very difficult, it brings us together. There is an unspoken feeling in the room – that we all feel so very responsible for that loss, but we also all did our very best. Also, as a soldier, loss has a significant impact on me. 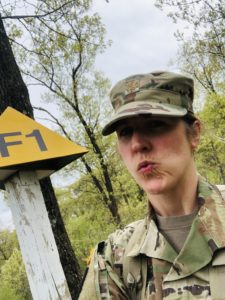 Are there special benefits to working for SpecialtyCare when you are in the Reserves?

SpecialtyCare offers the benefit of subsidizing my Army pay, as it is less than my salary as a perfusionist. This is something that they are not required to do by law but do voluntarily. This really helps when I go to my two-week annual training or other extended Army training duty. I don’t have to worry about budgeting for a period of reduced income. SpecialtyCare HR and my local leadership are incredibly supportive and we have great communication regarding changes or issues.