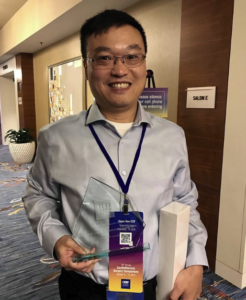 Congratulations to Yajun Ren, PhD, CCP, LP, perfusionist for SpecialtyCare, for receiving the Utley Award at CREF 2019, the 39th Annual Cardiothoracic Surgery Symposium. This award recognizes excellence in scientific research and presentation and is awarded for the best oral abstract presentation at the conference.

Ren presented his paper entitled, “Successful Removal of a Giant Intrathoracic Solitary Fibrous Tumor with the use of Cardiopulmonary Bypass and Circulatory Arrest.” The paper detailed a complex case he took part in where the complete resection of a solitary fibrous tumor of the pleura (SFTP) was necessary for the 59-year-old male patient’s survival. Due to complications during surgery, the patient was emergently placed on cardiopulmonary bypass for 210 minutes. The tumor weighed 10 kg and measured 26 x 23 x 11.5 cm and was eviscerated successfully. Three years later, the patient is working and traveling without supplemental oxygen dependence.

Ren was both surprised and excited to win the award but as he accepted, he told the audience of more than 500 medical professionals, the case would not have been a success without the entire surgical team at St. Mary’s Medical Center (Grand Junction, CO).

“In this type of case, teamwork plays a critical role,” he said. “Everyone prepares for the worst-case scenario. Teamwork is the foundation of success in the OR.”

James Buck, Regional Director of Operations for the South Central Perfusion Region said Ren is incredibly knowledgable and has been an integral part of his team.

“Yajun is very deserving of this prestigious award,” he said. “Being recognized by your peers for the work you’ve done is a great accomplishment for any perfusionist.”

Ren has been a traveling perfusionist with SpecialtyCare for four years covering cases in our South Central Perfusion Region. This is the 20th annual Utley Award, named in honor of Joe R. Utley MD, Founder, and Director of the Cardiothoracic Research and Education Foundation (CREF).